Creating the first version of the costume was pretty simple, we had an Ikea laundry basket laying around along with some suspenders. Since we didn’t want to look too strange running around with metal coils, we bought a few pieces of fabric from the store to cover it up. Here’s a breakdown of the materials used:

We weren’t sure how the costume would come together, but we decided the best way would be to clip the suspenders to the coils directly and reinforce it with a keyring in case it broke off. For the front and back of the coils we added some duct tape to make a small belt in between so the coils wouldn’t stretch too much. Safety pinned on the fabric and voila!

We took the first version of the costume for a 5K run around Pasadena and it held up surprisingly well, the suspender clips did not come off and the safety pins didn’t tear the fabric. All good signs that a costume with these materials might hold up for an entire marathon distance. A little embarrassing at first showing up to our run club with this on, but everyone was supportive and gave us some ideas for the next revision of the costume.

We had approximately 2 months to build out and thoroughly stress test the costume during some runs, longer than 5K, before the Berlin Marathon. It took a few weekends to get the prototype put together, as it takes multiple people to model the costume. Having a successful run with the prototype, we started work on pulling together the supplies we needed for the full build. This list was revised many times during our trial and error period, but should mark items that were actually used for construction:

Most of the materials for the body, stripes, head and bottom were acquired in Downtown Los Angeles, we took a few trips to the garment district to select fabrics and eventually found the googley eyes.

Close up of the material selected for the body of the caterpillar, a really nice sequenced material in green! Best of all, this fabric was light and airy and wasn’t too expensive compared to others we encountered. 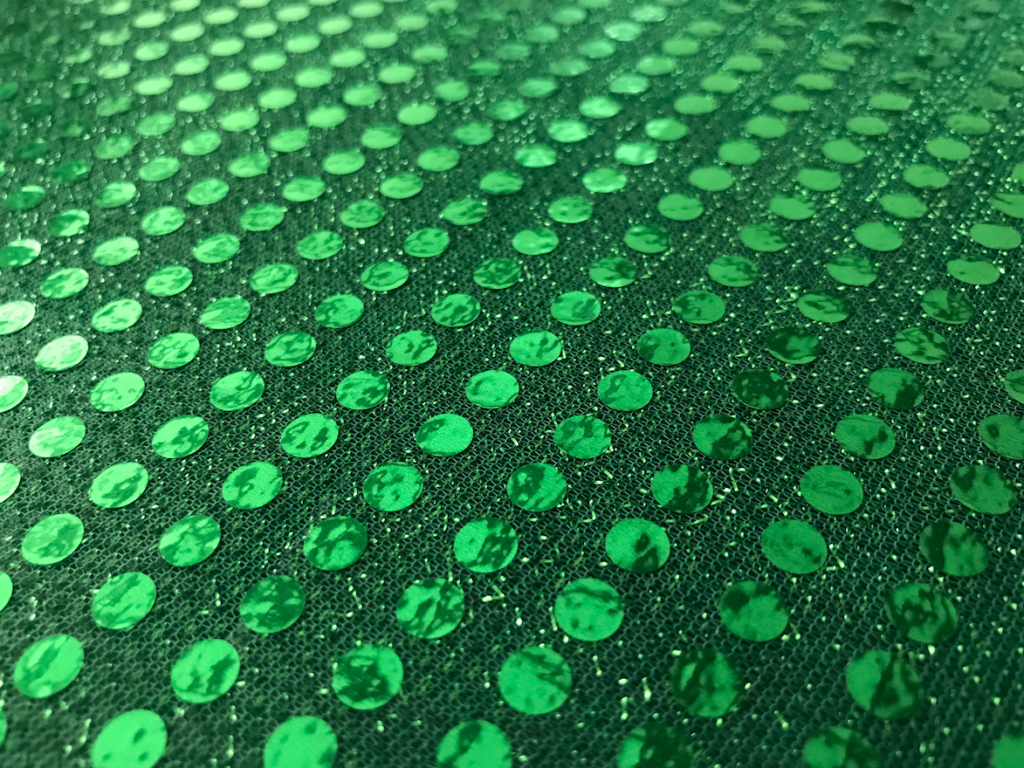 Putting it all together

Assembly and testing of the costume was a huge group effort, we had friends and family come by at differnt hours of the night to lend a hand in sewing, glueing, modeling, etc. Lots of pizzas and sodas were consumed in the making of this little guy. 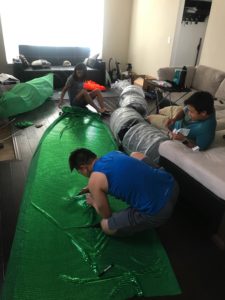 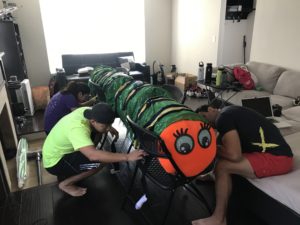 How did we come up with the idea for the caterpillar?

This was probably the area that took the most time (next to the actual costume build) there were a lot of 4 person costume ideas thrown around – but finding the one that would fit our group dynamic and become viable. And also our key requirement was to make it unique and fun!

We came up with a short list of ideas and then started to bounce ideas around with friends and our run club, Dog Haus Run Club (DHRC) in Pasadena, CA. I recall at the original inspiration that we thought would work was a “slinky” from Michelle Hernandez at DHRC. Somehow that idea morphed into a “slinky caterpillar” which since the slinky is flexible and would give the costume some bounce. In the end you wouldn’t know our caterpillar is a slinky, however, the costume functions the same – beneath the shiny sequence fabric.

The idea for the Caterpillar just kind of stuck, and we came up with this original mockup of the costume during our flight to run the San Francisco Marathon this past July.

(Yes, it looks like it was created in Microsoft Paint… but I we Photoshop…)

How do you actually apply for a Guinness World Record attempt?

We weren’t sure where to start but we did a Google search to see what the current record was for this record, and stumbled upon a write up about a group of 4 that had run the London Marathon as a fire truck in 05:20. Since we can all run a sub 4 marathon, we thought this attempt would be within our reach and got to work on the application process.

Application starts with creating an account at Guinnessworldrecords.com. Once you have an account created you are able to do a comprehensive search of all current record holders. In order to apply we found the name of the record and put in our official application. We had to specify which Marathon, goal time, and persons on the team.

Note: You cannot attempt record without an approval from the GWR first. Build in extra time to allow for them to review and approve your attempt.

Once our application was reviewed by GWR, it proceeded to the next phase where we were given a list of criteria that must be followed in order to break the record (i.e. Costume must be carried by team, restroom break guidelines, etc). In order to get fully approved for the attempt, we also had to submit finished photos of the costume to ensure it’s instantly recognizable as a costume during the race.  Our original attempt was sent back to us, and that’s where we spent a little more time to work on the stripes and put the antenna onto the RADepillar. 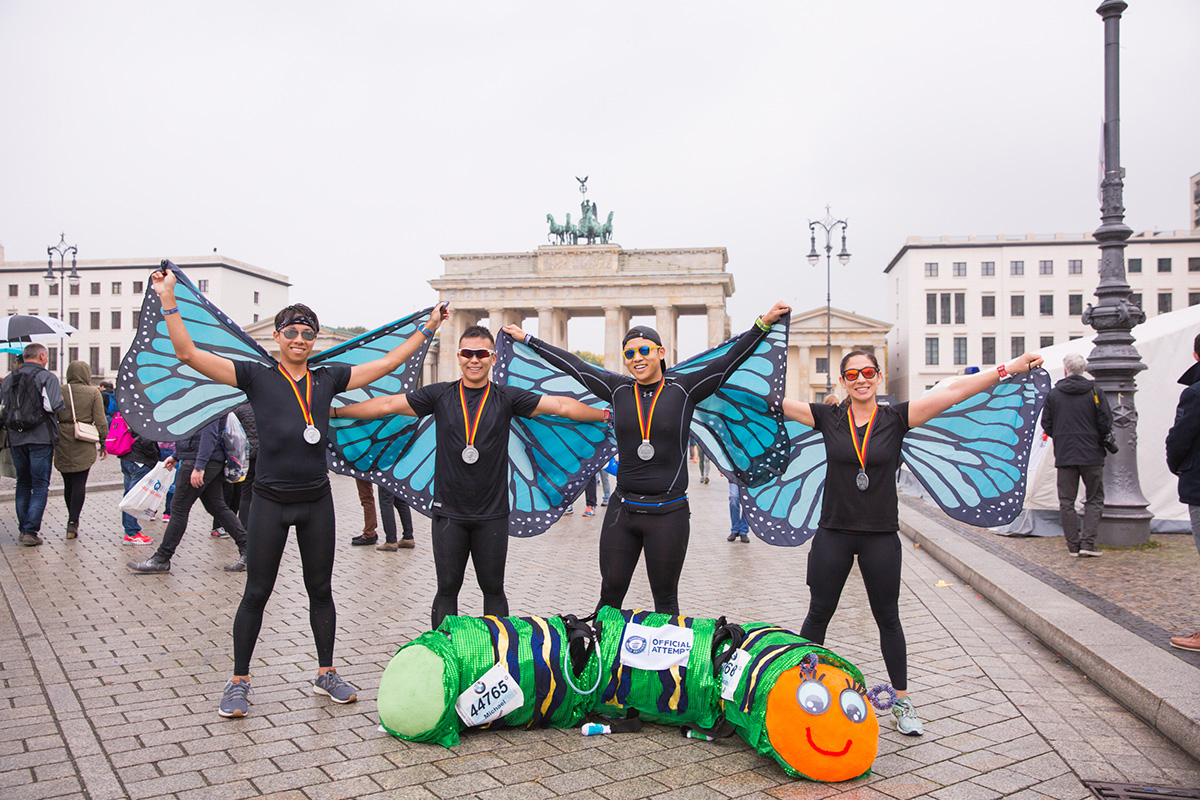 It has been a little over a week since my friends and I traveled out to Berlin, Germany in attempt to set the Guinness World Record for fastest 4 person marathon in a costume! Still ridiculous, but we’re overwhelmed by the support and curiosity that friends, family and folks over the internet have with the Googley eyed Caterpillar (we call it the RADepillar after our friends and family cycling team) that ran the Berlin Marathon. Our official time was 04:53, which beat the previous record holder by a total of 10 minutes.

We’ve received a number of WTF and questions about how this crazy contraption actually worked, so here’s a little write-up: